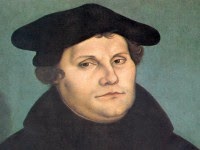 2. This is the same as permitting Pelagians and all heretics to triumph, indeed, the same as conceding victory to them.

3. It is the same as making sport of the authority of all doctors of theology.

5. It is false to state that man’s inclination is free to choose between either of two opposites. Indeed, the inclination is not free, but captive. This is said in opposition to common opinion.

6. It is false to state that the will can by nature conform to correct precept. This is said in opposition to [Duns] Scotus and Gabriel [Biel].

7. As a matter of fact, without the grace of God the will produces an act that is perverse and evil.

8. It does not, however, follow that the will is by nature evil, that is, essentially evil, as the Manicheans maintain.

9. It is nevertheless innately and inevitably evil and corrupt.

10. One must concede that the will is not free to strive toward whatever is declared good. This is in opposition to Scotus and Gabriel.

11. Nor is it able to will or not to will whatever is prescribed.

12. Nor does one contradict St. Augustine when one says that nothing is so much in the power of the will as the will itself.

13. It is absurd to conclude that erring man can love the creature above all things, therefore also God. This is in opposition to Scotus and Gabriel.

14. Nor is it surprising that the will can conform to erroneous and not to correct precept.

15. Indeed, it is peculiar to it that it can only conform to erroneous and not to correct precept.

16. One ought rather to conclude: since erring man is able to love the creature it is impossible for him to love God.

18. To love God above all things by nature is a fictitious term, a chimera, as it were. This is contrary to common teaching.

19. Nor can we apply the reasoning of Scotus concerning the brave citizen who loves his country more than himself.

21. No act is done according to nature that is not an act of concupiscence against God.

22. Every act of concupiscence against God is evil and a fornication of the spirit.

23. Nor is it true that an act of concupiscence can be set aright by the virtue of hope. This is in opposition to Gabriel.

24. For hope is not contrary to charity, which seeks and desires only that which is of God.

25. Hope does not grow out of merits, but out of suffering which destroys merits. This is in opposition to the opinion of many.

27. But it is an act of conversion already perfected, following grace both in time and by nature.

29. The best and infallible preparation for grace and the sole disposition toward grace is the eternal election and predestination of God.

30. On the part of man, however, nothing precedes grace except indisposition and even rebellion against grace.

31. It is said with the idlest demonstrations that the predestined can be damned individually but not collectively. This is in opposition to the scholastics.

32. Moreover, nothing is acheived by the following saying: Predestination is necessary by virtue of the consequence of God’s willing, but not of what actually followed, namely, that God had to elect a certain person.

33. And this is false, that doing all that one is able to do can remove the obstacles to grace. This is in opposition to several authorities.

34. In brief, man by nature has neither correct precept nor good will.

35. It is not true that an invincible ignorance excuses one completely (all scholastics notwithstanding);

36. For ignorance of God and oneself and good work is always invincible to nature.

37. Nature, moreover, inwardly and necessarily glories and takes pride in every work which is apparently and outwardly good.

38. There is no moral virtue without either pride or sorrow, that is, without sin.

39. We are not masters of our actions, from beginning to end, but servants. This is in opposition to the philosophers.

41. Virtually the entire Ethics of Aristotle is the worst enemy of grace. This is in opposition to the scholastics.

42. It is an error to maintain that Aristotle’s statement concerning happiness does not contradict Catholic doctrine. This is in opposition to the doctrine on morals.

43. It is an error to say that no man can become a theologian without Aristotle. This is in opposition to common opinion.

44. Indeed, no one can become a theologian unless he becomes one without Aristotle.

46. In vain does one fashion a logic of faith, a substitution brought about without regard for limit and measure. This is in opposition to the the new dialecticians.

47. No syllogistic form is valid when applied to divine terms. This is in opposition to the Cardinal [Peter of Ailly].

48. Nevertheless it does not for that reason follow that the truth of the doctrine of the Trinity contradicts syllogistic forms. This is in opposition to the same new dialecticians and to the Cardinal.

49. If a syllogistic form of reasoning holds in divine matters, then a doctrine of the trinity is demonstrable and not the object of faith.

50. Briefly, the whole Aristotle is to theology as darkness is to light. This is in opposition to the scholastics.

51. It is very doubtful whether the Latins comprehended the correct meaning of Aristotle.

52. It would have been better for the church if Porphyry with his universals had not been born for the use of theologians.

53. Even the more useful definitions of Aristotle seem to beg the question.

54. For an act to be meritorious, either the presence of grace is sufficient, or its presence means nothing. This is in opposition to Gabriel.

55. The grace of God is never present in such a way that it is inactive, but it is a living, active and operative spirit; nor can it happen that through the absolute power of God an act of friendship may be present without the presence of the grace of God. This is in opposition to Gabriel.

56. It is not true that God can accept man without his justifying grace. This is in opposition to Ockham.

57. It is dangerous to say that the law commands that an act of obeying the commandment be done in the grace of God. This in opposition to the Cardinal and Gabriel.

58. From this it would follow that “to have the grace of God” is actually a new demand going beyond the law.

59. It would also follow that fulfilling the law can take place without the grace of God.

60. Likewise it follows that the grace of God would be more hateful than the law itself.

61. It does not follow that the law should be complied with and fulfilled in the grace of God. This is in opposition to Gabriel.

62. And that therefore he who is outside the grace of God sins incessantly, even when he does not kill, commit adultery, or become angry.

63. But it follows that he sins because he does not spiritually fulfill the law.

64. Spiritually that person does not kill, does not do evil, does not become enraged when he neither becomes angry nor lusts.

65. Outside the grace of God it is indeed impossible not to become angry or lust, so that not even in grace is it possible to fulfill the law perfectly.

66. It is the righteousness of the hypocrit actually and outwardly not to kill, do evil, etc.

67. It is by the grace of God that one does not lust or become enraged.

68. Therefore it is impossible to fulfill the law in any way without the grace of God.

69. As a matter of fact, it is more accurate to say that the law is destroyed by nature without the grace of God.

70. A good law will of necessity be bad for the natural will.

71. Law and will are two implacable foes without the grace of God.

72. What the law wants, the will never wants, unless it pretends to want it out of fear or love.

74. The law makes sin abound because it irritates and repels the will [Rom 7,13].

75. The grace of God, however, makes justice abound through Jesus Christ because it causes one to be pleased with the law.

76. Every deed of the law without the grace of God appears good outwardly, but inwardly it is sin. This is in opposition to the scholastics.

77. The will is always averse to, and the hands inclined toward, the law of the Lord without the grace of God.

78. The will which is inlined toward the law without the grace of God is so inclined by reason of its own advantage.

79. Condemned are all those who do the works of the law.

80. Blessed are all those who do the works of the grace of God.

81. Chapter Falsas concerning penance, dist. 5, confirms the fact that works outside the realm of grace are not good, if this is not understood falsely.

82. Not only are the religious ceremonials not the good law and the precepts in which one does not live (in opposition to many teachers);

83. But even the Decalogue itself and all that can be taught and prescribed inwardly and outwardly is not good law either.

84. The good law and that in which one lives is the love of God, spread abroad in our hearts by the Holy Spirit.

85. Anyone’s will would prefer, if it were possible, that there would be no law and to be entirely free.

86. Anyone’s will hates it that the law should be imposed upon it; if, however, the will desires the imposition of the law it does so out of love of self.

87. Since law is good, the will, which is hostile to it, cannot be good.

88. And from this it is clear that everyone’s natural will is iniquitous and bad.

89. Grace as a mediator is necessary to reconcile the law with the will.

90. The grace of God is given for the purpose of directing the will, lest it err even in loving God. In opposition to Gabriel.

91. It is not given so that good deeds might be induced more frequently and readily, but because without it no act of love is performed. In opposition to Gabriel.

92. It cannot be denied love is superfluous if man is by nature able to do an act of friendship. In opposition to Gabriel.

93. There is a kind of subtle evil in teh argument that an act is at the same time the fruit and the use of the fruit. In opposition to Ockham, the Cardinal, Gabriel.

94. This holds true also of the saying that the love of God may continue alongside an intense love of the creature.

95. To love God is at the same time to hate oneself and to know nothing but God.

96. We must make our will conform in every respect to the will of God (in opposition to the Cardinal).

97. So that we not only will what God wills, but also ought to will whatever God wills.

In these statements we wanted to say and believe we have said anything [presumably translator means “nothing”] that that is not in agreement with the Catholic church and the teachers of the church.