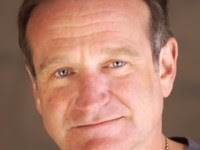 Regardless of the circumstances, the suicide of actor Robin Williams is a terrible tragedy. I won’t remark on William’s particular case, because the truth is that I don’t know. I didn’t know him personally. I do know that suicide is almost always complicated, and I can readily sympathize with others who have also struggled with suicidal thoughts, since I myself have entertained the question of ending my own life.

Each one’s journey in this world is met with difficulty. Some have it far more difficult than others, yet no one escapes the harsh affects of the world. There is no one free from regrets or experiences that harmed their lives. Especially when one contemplates bad choices, “what ifs,” wrong turns, and permanent scars resulting from the actions and words of ourselves or others who’ve influenced us, it is easy and even natural to be swept under the tide of hopelessness and despair. And when one reaches the point where he wholeheartedly believes in his own mind that there is absolutely no hope of escape or relief, and that death is the only logical release from such despair, suicide becomes a reasonable option. When there is no end in sight from all the pain of the past, the fresh wounds of the present, and inevitable abuses of the future, one can easily rationalize that whatever comes after death couldn’t possibly be any worse than this life.

And even if one has a seemingly perfect life — plenty of money, supportive family and friends, physical and mental health, and all the trimmings — there are still many problems elsewhere in the world. Even if I have it all, millions upon millions are suffering all around me every single day and night. Families grieve, starve, and mourn. Children are abandoned, abused, and unloved. The innocent are annihilated by bombs, bloodied by wars, and left homeless by natural disasters. Even if I myself have a perfect life, others suffer injustice and evil around me every single day. So then the reality is that my life is not actually perfect because I live in an imperfect and cruel world. The fact that my life is without hardship, while my neighbors are tormented unjustly day and night, is itself a profound cruelty of this world. Then even the one with the perfect life has much to depress his spirits.

But even though the world is inevitably cruel under the best of circumstances, there is a Savior from all of these things. There is One Jesus Christ Who knows about every disease, injustice, and cruelty, and He is doing something about it, even this very moment. Soon He will destroy all evil and will hold to account every wicked deed ever committed, and He is coming to right every wrong and lift up every man, woman, and child who calls upon His Name. Everyone Who puts their hope in Him will be saved from the sin and the brokenness of the world. So the Christian naturally hates the cruelty of the world and becomes full of sorrow by the all that is broken around him and longs to be with Christ through the escape of death. Even the apostle Paul said,

“For to me to live is Christ, and to die is gain. If I am to live in the flesh, that means fruitful labor for me. Yet which I shall choose I cannot tell. I am hard pressed between the two. My desire is to depart and be with Christ, for that is far better.” (Philippians 1:21-23)

Even the Christian is looking for a better world — a world free of all the cruel atrocities taking place here. And that new world is as much a reality as is the ground underneath my feet, and it is for that new world that the Christian hopes. It is because of the promise of that new world that the Christian presses on in this one, following the call of Christ to endure in Him, to seek first His righteousness and His goodness, because it is only by his goodness that this new and perfect world will be established. And it will only be inhabited by those who love His goodness and righteousness. As the apostle Peter said,

“Since all these things are thus to be dissolved, what sort of people ought you to be in lives of holiness and godliness, waiting for and hastening the coming of the day of God, because of which the heavens will be set on fire and dissolved, and the heavenly bodies will melt as they burn! But according to his promise we are waiting for new heavens and a new earth in which righteousness dwells.” (2 Peter 3:11-13)

So the Christian is no better off than the non-Christian. Every single individual is suffering on this earth, longing for escape from its evils within and without. The difference for the Christian is that the Lord God in His mercy has shown to him the escape he has been longing for — the riches of the salvation that come through righteous restoration with God, having a new heart, and trusting in Him by faith. And the Christian has not earned this, but has received it entirely as a gift, through an invitation that is open to anyone who calls on the name of Christ,

because, if you confess with your mouth that Jesus is Lord and believe in your heart that God raised him from the dead, you will be saved. For with the heart one believes and is justified, and with the mouth one confesses and is saved. For the Scripture says, “Everyone who believes in him will not be put to shame.” (Romans 10:9-11)

I have no right to judge Robin Williams. Except by the grace of God I would follow the same course. But I know Who is my Redeemer. He lives, and He answers all who call on His name.